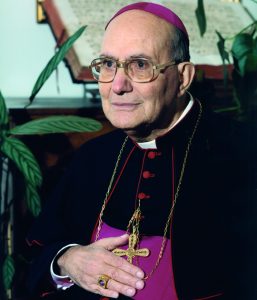 William Giaquinta was born on June 25, 1914, in Noto, Sicily.  He was a mischievous boy who often skipped school.  Hoping he would learn greater discipline, William’s parents sent him to Minor Seminary in Rome.  Upon entering the doors of the school, he felt in his heart a certainty that he was meant to be a priest, and soon thereafter he continued into Major Seminary.  On March 18, 1939, he was ordained Father William Giaquinta.  Early in his priesthood, he developed a desire to spread the Universal Call to Holiness, the idea that every person is called to be a saint.

Guided in discernment by his patrons, Saint Joseph and Our Lady of Trust, Father Giaquinta felt called to something more. In 1947 he founded the Pro Sanctity movement, and the following year he was given the title of Monsignor in recognition of his devotion to spreading the Universal Call to Holiness. In 1968 he was appointed bishop. Bishop Giaquinta continued to serve Christ in the movement and the church until he passed away in 1994; many, many people attended his funeral and nearly 100 priests concelebrated the Mass. 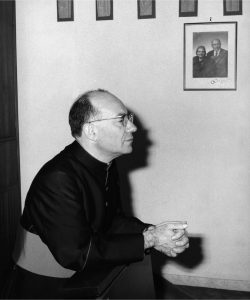 Jesus, Divine Master, who came down from heaven to give us the abundance of grace, increase it within us and make it become a river that overflows into eternal life

Of your free will, you chose the agony of your passion and death, and in the Eucharist, you give yourself as food for all people: help us understand the greatness of such an example.

May the fire of your love burn away the impurities of our human weakness and give us the strength to follow your invitation to the infinite perfection of the Father.

Of faith, give us firmness; of charity, zeal; of hope, firm certainty. Give us the desire to be heroic in every virtue and the trust to attain holiness with the help of Mary.